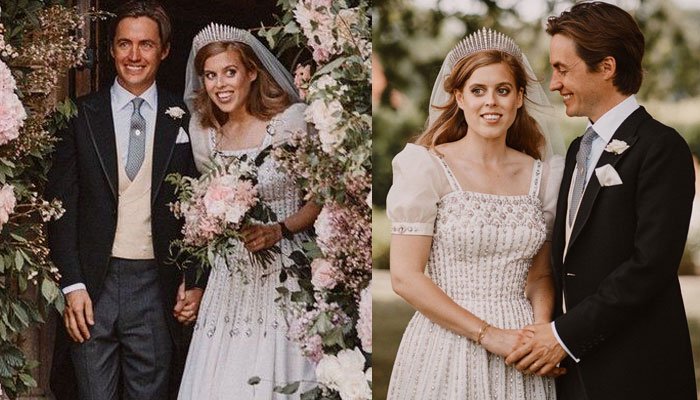 Day after Princess Beatrice and Edoardo Mapelli Mozzi shared a glimpse of their surprise royal wedding, the happy couple released more pictures  from the romantic ceremony.

For her special day, Beatrice, 31, wore two extraordinary pieces from her 94-year-old grandmother, who attended the ceremony with husband Prince Philip.

As befitting the intimate ceremony, which took place on Friday at All Saint’s Chapel in Windsor Great Park, both Beatrice’s romantic ivory dress and sparkling diamond tiara were loaned to her by her grandmother, Queen Elizabeth.

One sweet snapshot shows the bride and groom walking hand-in-hand with big smiles on their faces on the grounds of All Saint’s Chapel in Windsor Great Park.

In the second photo, Edoardo gazes lovingly at his new bride, whose gorgeous wedding gown and tiara could be seen in exquisite detail.

Four official pictures have been issued after their small ceremony at The Royal Chapel of All Saints in Windsor.

In another they are outside the entrance with Beatrice’s grandparents, the Queen and the Duke of Edinburgh.

Beatrice’s parents, the Duke and Duchess of York, did not appear in either of the released photos, though the palace confirmed her father walked her down the aisle. It comes as Prince Andrew continues to keep a low profile following the arrest of his former friend Ghislaine Maxwell for sex trafficking offences, which she denies.

“Her Royal Highness Princess Beatrice of York and Mr. Mapelli Mozzi have been touched by the warm wishes they have received since their wedding.”

Prince Andrew walked his daughter down the aisle, and Mapelli Mozzi’s young son served as the best man and page boy.